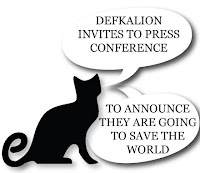 Daniele Passerini today receieved the following invitation in his mailbox:


"Dear ***,
Green Technologies cordially invites Defkalion knows you to attend press conference to announce to the ITS Technological breakthroughs in energy with exclusive rights to Greece.
Kind Regards,
Symeon Tsalikoglou.

Today, there is great pessimism regarding the future energy needs of our planet. Energy will soon become universally cheap, clean and readily usable.

Andrea Rossi and Sergio Focardi have discovered and patented a technology that will change the world’s energy field. This technology will be made commercially available by Defkalion Green Technologies s.a., a Greek company.

By combining Hydrogen and Nickel to create an exothermic reaction (at room temperatures and in a device that can be safely placed in households and also industry) heat is emitted on a 24-hour basis. This energy is produced at a fraction of the cost in comparison to currently available energy sources, it is clean and totally green. Furthermore, using conventional, readily available third-party technologies, the heat can also be used to produce electricity.

Defkalion Green Technologies s.a. has secured exclusive distribution rights for the entire world, except for the USA and military applications. It will start production and first distribution of its products from its factory in Xanthi for the Greek and Balkan markets, initially. Two more factories are scheduled within 2012. International sales are already strong in demand, which will spur exports.

Suffice to say, that Greece possesses 83% of Europe’s Nickel deposits, a key strategic consideration. Furthermore, at this time of the global financial crisis, Greece is faced with a golden opportunity to become energy self-sufficient, gain in employment in one of its most underdeveloped regions, as well as become a technological leader in this new scientific field.

The press conference will comprise of undisclosed to-date information relating the technology’s commercial and industrial applications, the company’s strategic placements, as well as commercial issues that are of interest not only to Defkalion’s future customers, but also to the political society of our country. It goes without saying that such an important development also possesses a strong international dimension in many aspects.

You can read the original blogpost here (English via Google Translate)