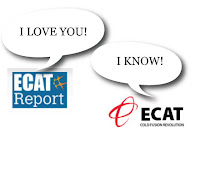 After the October 28 megawatt E-cat test, there has not been much information of interest delivered from Rossi.
However, the blogosphere is still engaged in speculations about E-Cat.
(Check out ecatnews.net for example.)
One of the blogs most infiltrated with Andrea Rossi is ecatreport.com that boosts up Rossi´s statements about the development of the E-Cat.
Today E-Catreport writes that E-Cat Set To Rule The Market In 2012, and that "by next year the world market will be filled with 1 million units of 10 kW household E-Cats".


One can conclude that the E-Catreport contains hardly any critical thoughts or critical information about the validity of Andrea Rossi´s statements, but rather put up cheerful headlines like ECat Deviates From All Scientific Theories. But That’s Fine.
(Well, we´ll see how "fine" that really turn out to be.)


Why the joyful and cheerful approach at E-Catreport, then?
One reason for this might be that one of the editors (according to this YouTube-clip) of
E-Catreport, Magnus Holm, also is engaged in the company Hydrofusion that runs the website ecat.com - "The Official Website of Andrea Rossi’s Energy Catalyzer"
As Andrea Rossi now collects pre-orders for his E-Cats, Hydrofusion aims to be a part of the business.
Magnus Holm was interviewed in Ny Teknik November 18, where he explains that
“The aim is to be a portal to all stakeholders regarding the E-cat. In particular, we want to be as officially linked to Rossi as possible in order to capture as much commercial interest as possible through Ecat.com.”


"NyT: You have already been accused of contributing to fraud. What is your comment?


Holm: “We are not engaged in any deception, and I do not think Rossi is engaged in any fraud either. If it would turn out that it does not work, in spite of everything, I would think it is about self-deception. I believe it works.”

So if you feel that E-Catreport.com is engaged in any "deception", you are completely wrong.
It´s "self-deception"!